Bill and Hillary Clinton invented a novel way of personally enriching themselves while Hillary held the offices of the US senator from New York and the US Secretary of State. During Hillary’s tenure in public office, Bill gave 544 speeches which earned him a total of $105,986,691, or an average of $194,828 per speech.

As pointed out in a previous post, it was never accepted before Hillary Clinton became Secretary of State, that high office holders could personally enrich themselves while in office, but the Clintons found a loophole around that restriction through a spouse. It would not be surprising if other high office holders copy the Clintons’ example in the future, by using family members to collect money from groups which seek to influence public policy or gain favors from the government.

Questions have been raised whether these 544 speeches served as a vehicle to violate public corruption laws. As the US Secretary of State, Hillary Clinton is alleged to have done favors for two dozen groups which donated to the Clinton Foundation and/or paid Bill to give speeches. Each of those allegations merits a separate investigation with power of subpoena to gather evidence and question witnesses under oath.

Without the power to conduct a full legal investigation, it is difficult to know whether the Clintons broke the law. However, examining the numbers of Bill’s paid speeches may be instructive in investigating patterns of possible influence buying and corruption. To that end, I have created a spreadsheet of all the paid speeches by Bill, Hillary and Chelsea Clinton and placed it in the public domain so that any concerned citizen may analyze the numbers and investigate which groups were giving money to the Clintons and their Foundation. 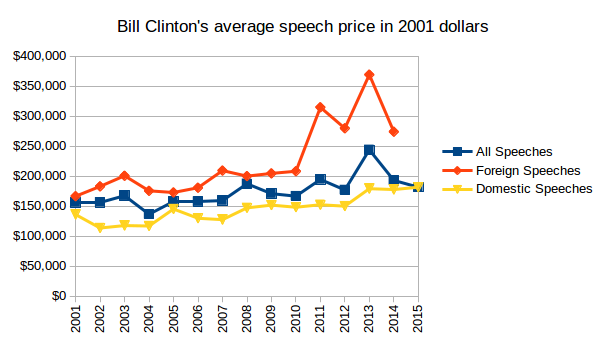 In contrast, the average speaking fees of Bill’s foreign speeches have risen dramatically, growing 121% between 2001 and 2013, when they peaked at $485,714 per speech (or
$369,253 in constant 2001 dollars). Bill was still willing to give foreign speeches for his standard fee around $200,000 in 2011-2013, but he gave a startling number of speeches during this period where he received between $400,000 and $700,000. These outlier speeches for which Bill received more than double his standard fee dramatically pulled up the average.

Even more curious is the fact that 37 out of the 39 of these outlier speeches costing $400,000 or more were given abroad, and 30 out of the 39 occurred during the years 2009-2013, when Hillary was Secretary of State or had just vacated that office. The question is why would foreign entities be willing to give overly generous sums of money to the spouse of the US Secretary of State?

Another curious aspect of the speaking fees for Bill Clinton is the number of organizations who repeatedly paid Bill to give speeches. After hearing Bill’s pearls of wisdom once and getting the photo op with him for company propaganda, why hire him to give speeches again and again?

What the numbers show is that a select number of foreign entities paid Bill Clinton large speaking fees and another select number of entities in North America paid him to repeatedly give speeches in the US and Canada. Of course, these numbers alone aren’t proof of criminal wrongdoing, but the first place investigators of Hillary Clinton should start looking is her interactions with the organizations which paid her husband large speaking fees.

The Clintons are hardly alone in participating in the legalized corruption of American politics. Gilens and Page (2014) examined 1979 policy changes enacted between 1981 and 2002 where there were public opinion polls conducted to indicate public preference according to income group. Gilens and Page found that:

When the preferences of economic elites and the stands of organized interest groups are controlled for, the preferences of the average American appear to have  only a minuscule, near-zero, statistically non-significant impact upon public policy.

Because small groups with wealth can effectively influence the decisions of the US government, they have enacted legislation which benefits special interests and the economic elite. The fact that effective taxation rates for the wealthy are at record lows and 20 Americans now own as much wealth as 50% of the US population is a demonstration of how much American public policy has been effectively bought by wealth interests.

Investigating Hillary Clinton for alleged violation of public corruption laws is not a panacea for getting money out of the US political system. In fact, it will probably only be initiated as a partisan witchhunt by Republicans who are just as tied to moneyed interests as the Clintons. They will likely seek to indict Hillary Clinton on narrow grounds which don’t call into question their own culpability in the current system. Nonetheless, public investigations of a president can open up the political space and the public demand for larger reforms. The senatorial investigation of Nixon which led to his resignation, plus the prior resignation of Spiro Agnew, led to a whole series of reforms to clean up government in the 1970s.
In the short term, a public investigation of Hillary Clinton will surely lead to even more gridlock in Washington and a bout of ugly partisanship, but it may be necessary to spur the general public into mobilizing for the reform of election finance laws and to convince powerful groups the US that the current system is untenable and must be reformed for the sake of  long-term stability. At the very least, it will send a power message to the political class that corruption as usual is politically risky, so it is best to reign in the worst abuses and avoid the appearance of corruption, in the name of political expediency.
Note: I am placing this article in the public domain, so it can be reposted and modified without my permission.